Intalytics conducted an analysis back in April that focused on shifts in airport terminal traffic for the first three months of 2020 pursuant to the onset of the COVID-19 pandemic. For this flash update, Intalytics updated the analysis to include mobile device activity through mid-July.

For each geofenced airport terminal, we queried mobile device data from January 1st, 2020 through July 15th, 2020.  Activity presented in the visuals below represent a comparison of activity against the month of January, which is used as the baseline.

The chart below shows indexed activity at the 30 large hub airports (those with approximately 9.0 million to 52.0 million enplanements per year) for each 7-day period from early February through mid-July:

This chart is striking in the consistency of decline felt across all large hub airports.  The low-water mark for airport traffic was in mid-April, when the 30 largest airports were down to an incredible 5.5% of pre-pandemic traffic levels. Activity has climbed since that time, with large hub airports now back to an average of 37% of January levels. However, there were wide disparities between airports in mid-July, with activity levels ranging from 12% to 60% of January levels. Some of the outliers include the following: 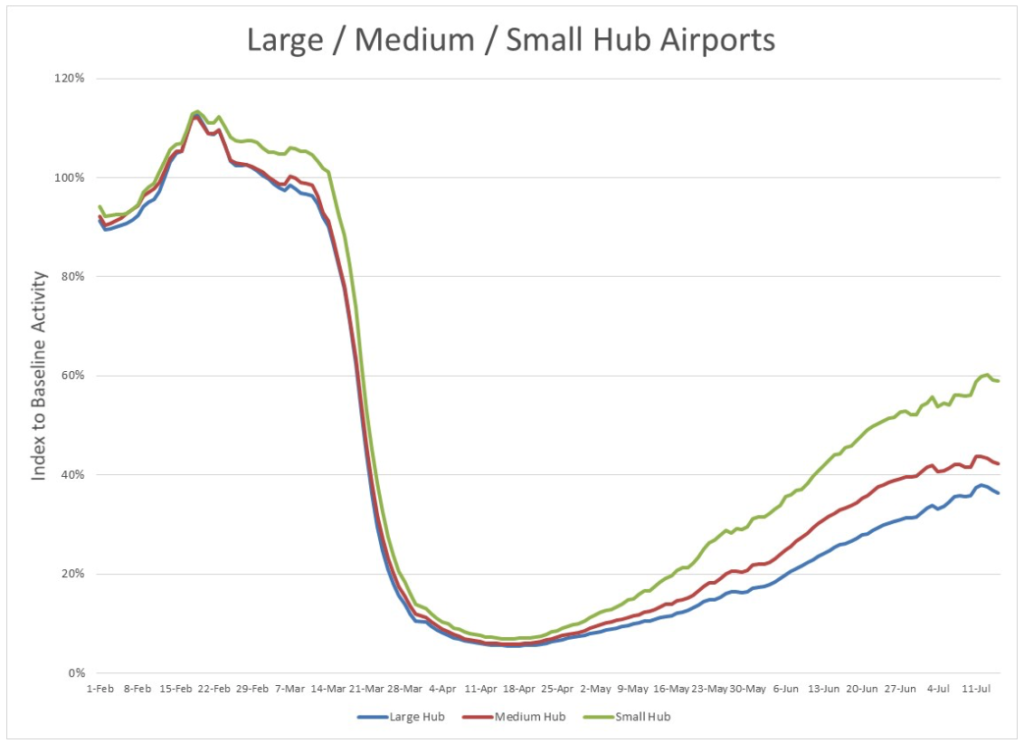 Another way to visualize this data is to display airport traffic in all continental U.S. large and medium hub airports as of July 15 (relative to pre-pandemic levels) in tabular and cartographic formats: 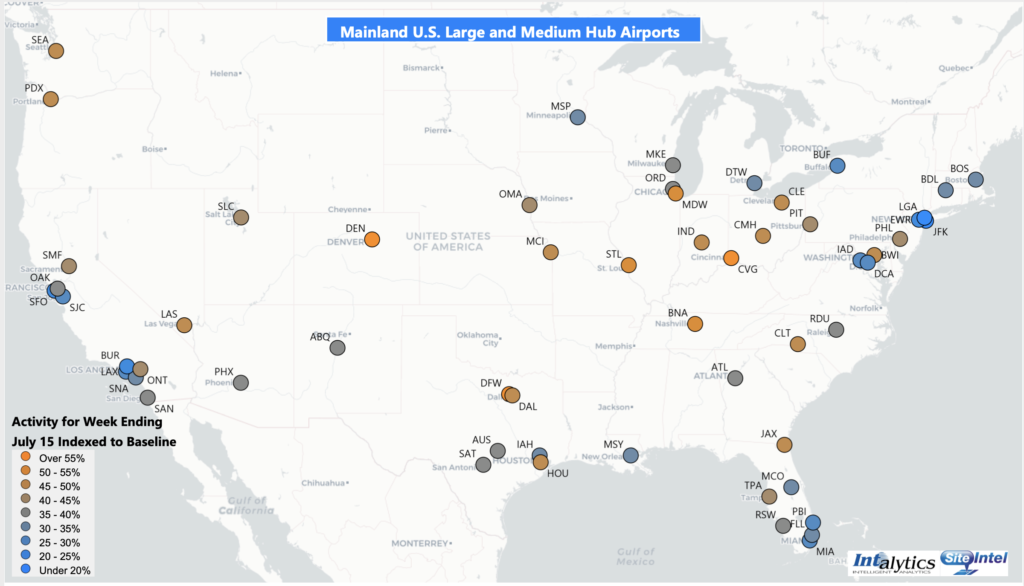 Overall, the mid-section of the country has experienced a larger rebound in airport traffic than coastal markets, with some notable exceptions:

One possible reason relates to airline seating capacities – large hub airports in Denver and in Dallas-Fort Worth (DFW) experienced major increases in traffic in the first two weeks of July. This recovery in traffic corresponds with the decisions by both American Airlines (DFW hub) and United Airlines (Denver hub) effective July 1 to fill planes to capacity. Delta Airlines, with major hubs in Detroit and Atlanta, has decided to continue blocking out middle seats at least through the end of September.

This updated analysis confirms the previous findings that not all airports are created equal. Airport traffic trends through late April were relatively consistent – since that time there have been enormous differences amongst airports with respect to their recovery as measured by the improvement in overally passenger activity as compared to pre-pandemic levels.

The speed at which airports will revert back to pre-pandemic traffic levels depends on many factors.  The current drop-in activity presents an opportunity for any operator interested in capitalizing on available terminal real estate to use data to detect and act on those trends in a proactive manner.  Intalytics stands ready to help in that regard – to learn more about how we help clients with understanding non-traditional deployment opportunities, please contact usfor more information.